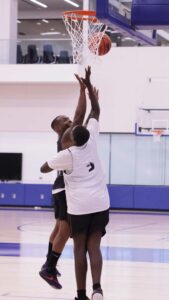 10 members of Detroit area law enforcement and 10 kids came together for pick-up basketball at the Pistons Performance Center (PPC).

The idea for Cops & Kids came to Founder & CEO Herman Moore when he was told the Detroit Pistons season ticket package Team 84 purchased came with two hours of court time at the Pistons Performance Center in Detroit.

“Instead of just coming out and shooting around and spending two hours as a company, why not do something for the community,” he said.

Moore and Team 84 Chief of Staff Kim Knight reached out to the team at Detroit Police Athletic League (PAL) with an idea.

“Team 84 said, ‘Hey, we’ve got this opportunity,'” said Detroit PAL CEO Fred Hunter. “‘We’ve got the Pistons practice facility for two hours. Let’s do something creative for the community.'”

Cops & Kids: an event bringing together 10 members of Detroit area law enforcement and 10 kids for a few games of pick-up basketball, allowing for a more relaxed atmosphere to communicate and connect.

“I think it’s a great environment for us to show that we can work together, we can have communication, and that there is no breakdown,” said Moore. “We just have to be able to sit down, have that conversation, and collaborate.”

“I’ve had the pleasure of being a police officer here for four years,” he said. “I’ve seen some of these kids in middle school and now playing against them in high school as they’ve gotten taller than me, their muscles are as strong as mine – it’s just a true beauty.”

As far as the dialogue going on throughout the game, Officer George said it was all positive, from advice on fundamentals to friendly trash talk.

“We’re hoping that this becomes an event that can extend through a lot of communities across the country,” said Moore. “We want to definitely have it originate here in Detroit, but also to organizations that have platforms that can extend that message that not all citizens are bad and not all cops are bad either. This is a place where we need one another.”

About the Author: Team 84